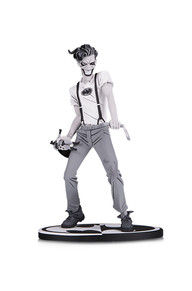 Based on the art of Sean Murphy

What if the greatest villain in Gotham City was not The Joker, but the Batman? That question is at the core of the epic eight-part limited series BATMAN: WHITE KNIGHT, which features the writing and art of Sean Murphy.

This limited-run Batman Black & White statue presents a highly detailed version of Murphy’s Joker, a nuanced, populist hero to the working men and women of Gotham. Trading his suit for streetwear, this Joker—known as Jack Napier in his moments of sanity—fights to end corruption and brutality from the city’s ruling class.

On his own or paired with the Batman Black & White: White Knight Batman, this Joker makes a great addition to any collection.