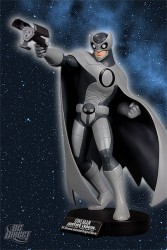 SCULPTED BY DEREK MILLER
“You people are my world’s last hope.” – President Lex Luthor
In a parallel universe, the lone survivor of Earth’s Justice League – Lex Luthor – travels through other-world dimensions to join forces with Superman, Batman, Wonder Woman, Green Lantern, The Flash, and J’onn J’onzz in a desperate attempt to save his world and his people. But the villainous Crime Syndicate controlled by Ultraman, Owlman and Superwoman will stop at nothing to maintain their domination. It will take wits, might and a sacrifice to defeat these unforgiving enemies in the spectacular DC Universe Original Animated Movie. Two Earths, two Leagues and one epic battle collide for a thrilling experience that will leave viewers breathless!
This hand-painted cold-cast porcelain maquette of Owlman is based on art from the highly anticipated Warner Home Video made-for-DVD animated original movie, Justice League: Crisis on Two Earths!
Measuring approximately 9.2″ tall x 5.5″ wide x 8.75″ deep (including the base), the maquette includes a 4-color Certificate of Authenticity and is packaged in a 4-color box. Limited edition of 4000!